In this series of 7 articles we will introduce smart and creative hacks to shoot amazing photos using the Kenko AI Flash AB600-R from famous Japanese photographer Kazuyuki Hagiwara. This article is 3rd.

Lately, the time we spend indoors has been steadily increasing. In light of this, I thought I would capitalize on the situation and try some shooting within the home. With the concept which I have titled "Shooting at Home!", I will be utilizing the Kenko AB600-R to introduce new ways of flash photography and a wide range of usages for camera flashes.

With this concept, I will be making use of regular household items as subjects for my photography. My first subject, cut flowers. It just so happens that I received some lisianthus flowers prior, thus I decided to make them my subject. Even with a single flash I can make numerous alterations to my photography, therefore I equipped myself with a single AB600-R and a transmitter.

I set a blackboard as my background, and a sketchbook in replacement of a reflector. Whether a blackboard or kent paper, by putting a dark border as your background and setting the subject (flowers) far away from it, the background will darken. The sketchbook was convenient as it only required opening to provide the desired reflection. The result: 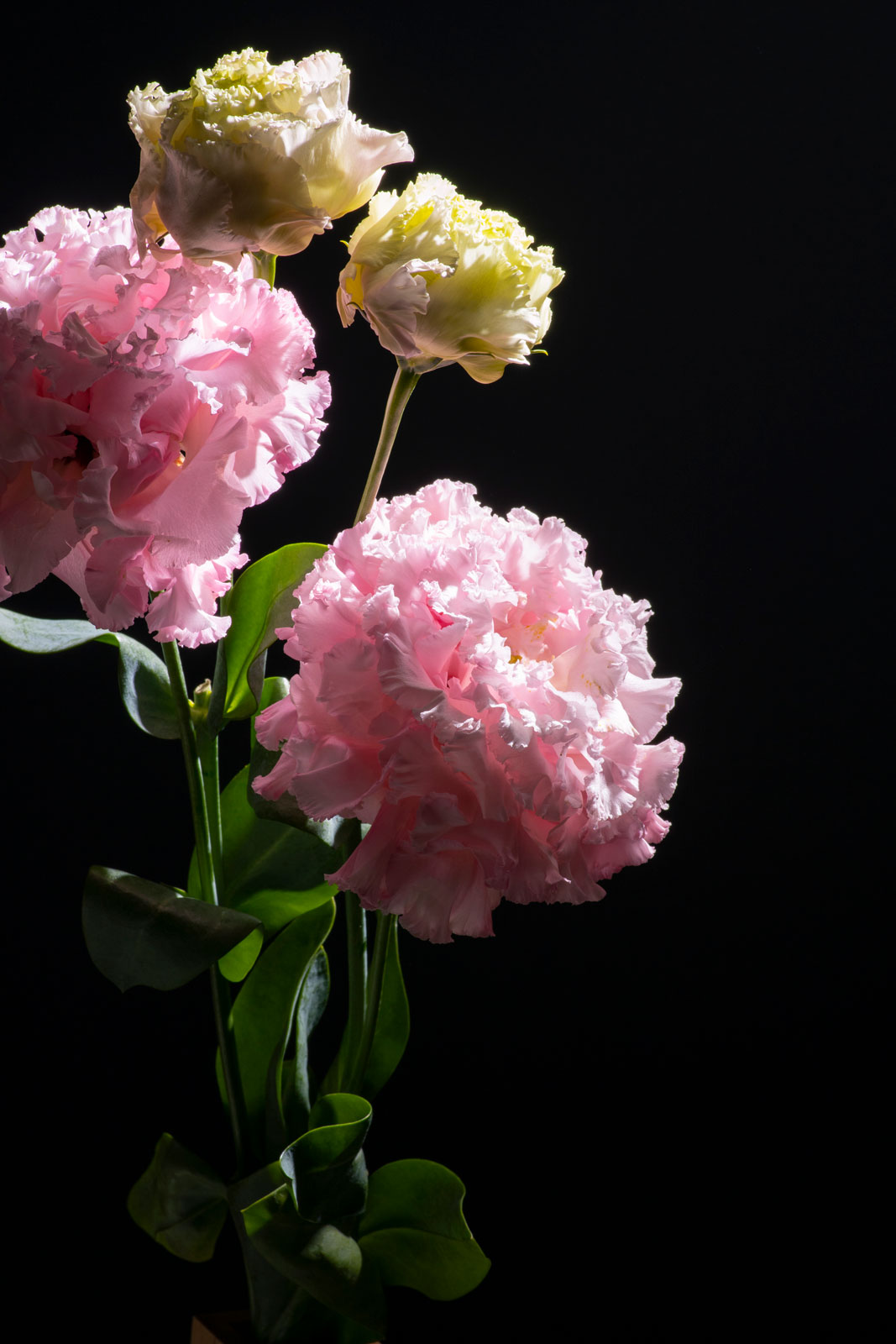 As per the picture below, the flash was set in a high position and oriented at 45° from behind the flowers. The sketchbook acting as a reflector was placed on the table. 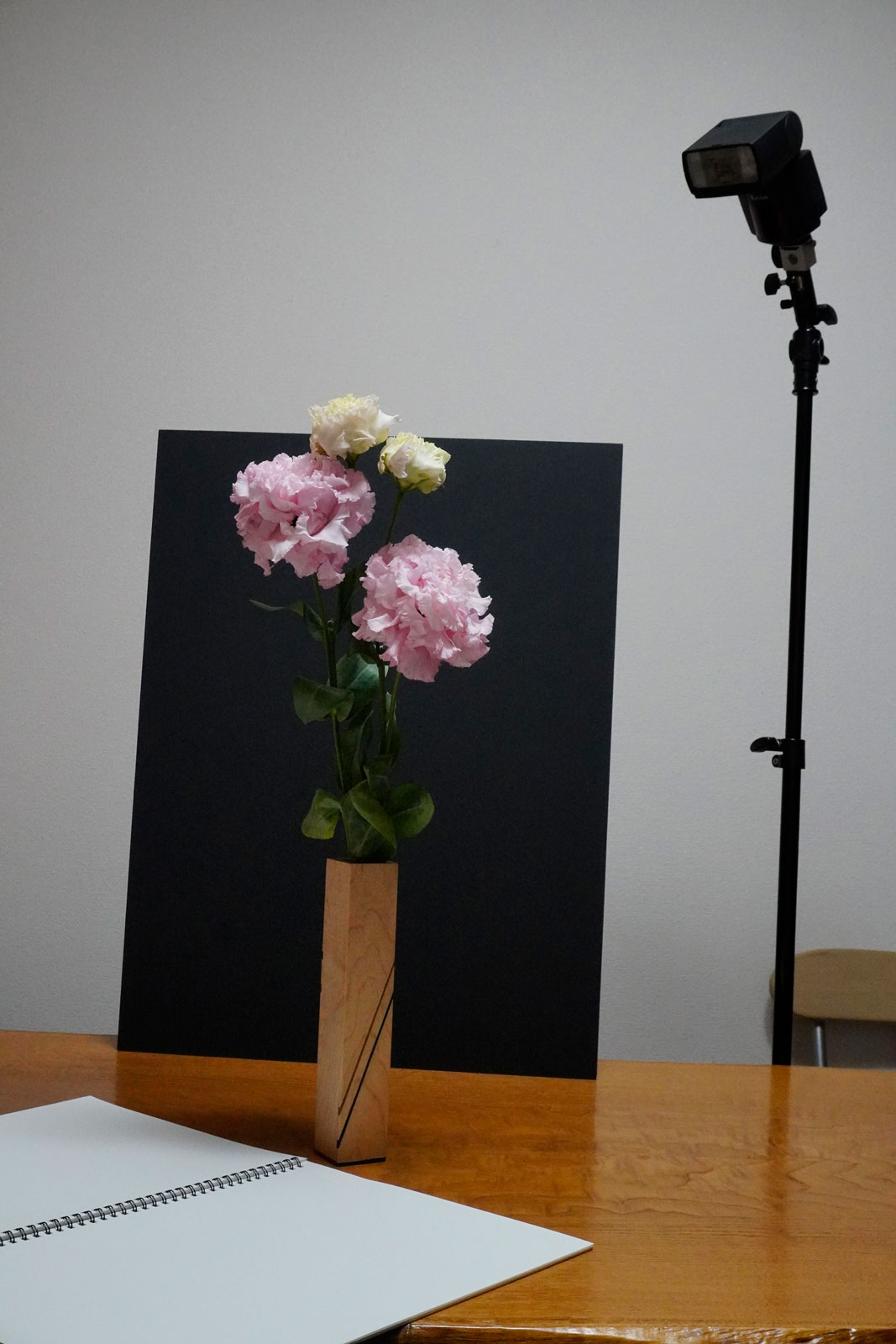 In principle, you decide the light intensity after deciding the flash's position. Using the flash as a spot light I wanted to capture a narrow area without hitting the background. Thus, I set the focal length at 200mm with the zoom. By utilizing this, I effectively avoided a large spread of light. I then closed the aperture down to f/16 and focused on the center of the flowers. I adjusted light intensity manually, starting at 1/16. As a result, the positioning of the flash was perfect. 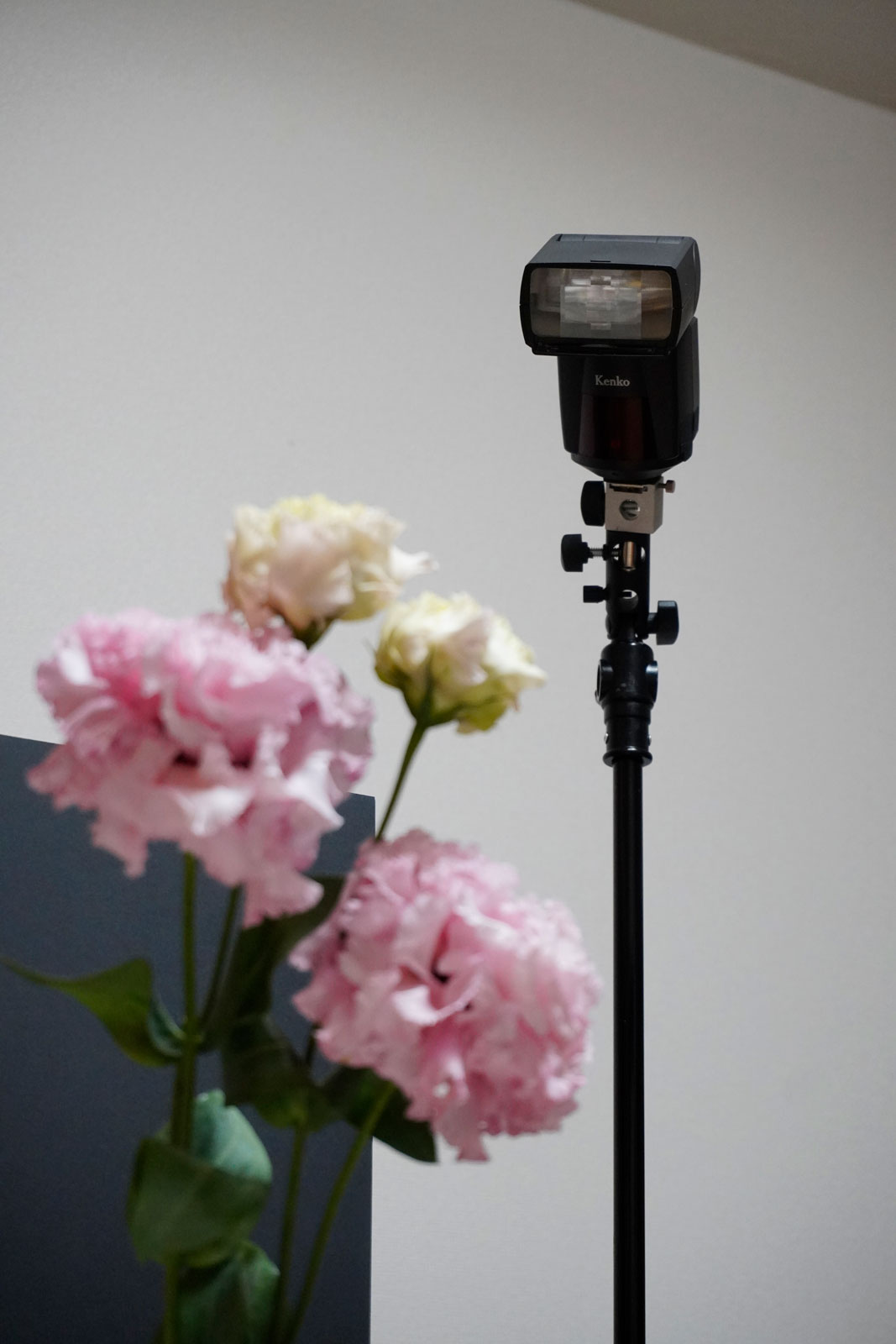 For my next trial, I used the flash from the opposite side. As the flowers' petals were blooming outwards, their expressions changed from left to right. My settings remained unchanged from the previous shot. 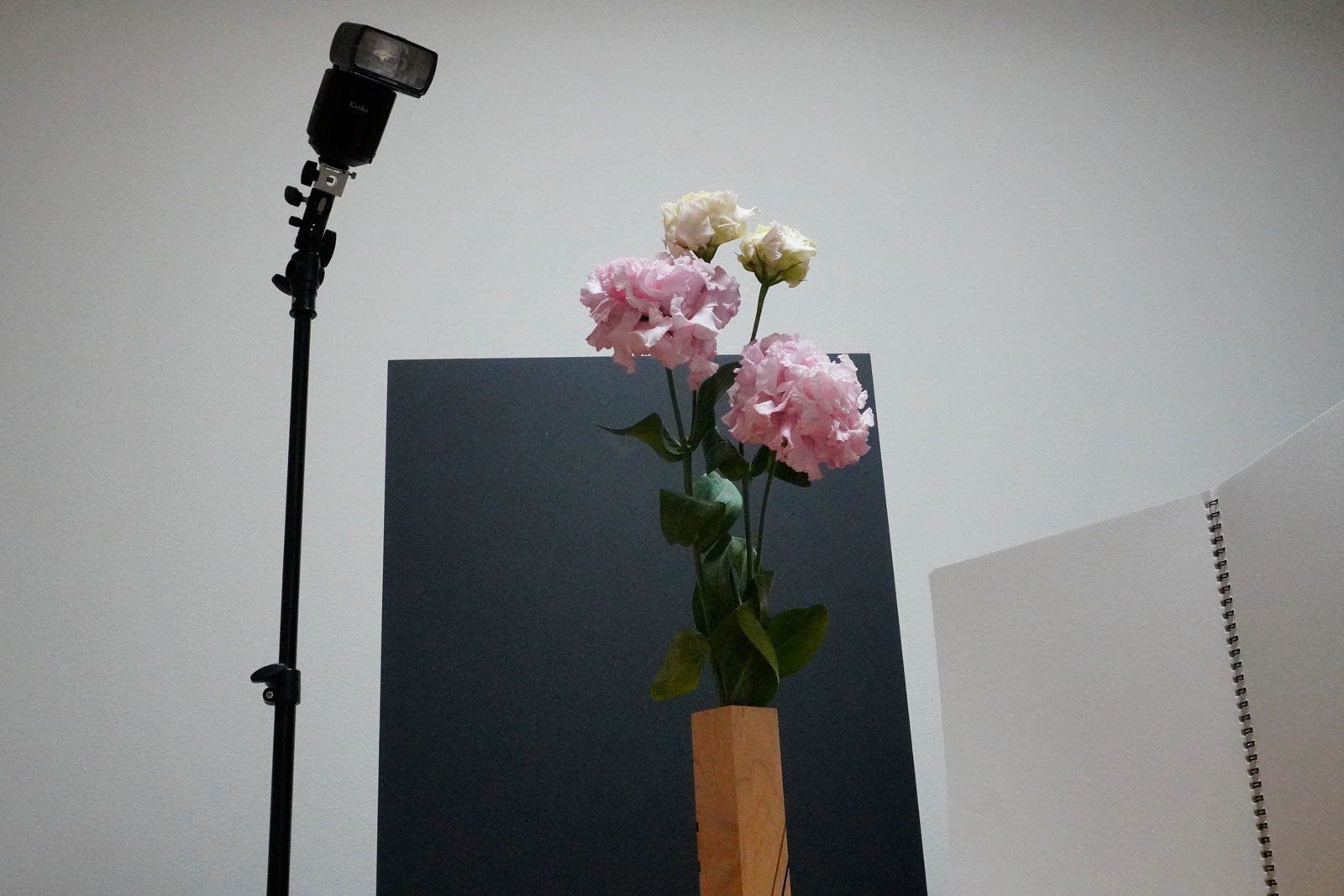 In accordance with the flowers' height, I established the sketchbook to brighten shadows. After ensuring that the flash would hit the flowers to full effect, I released the shutter and took the shot. 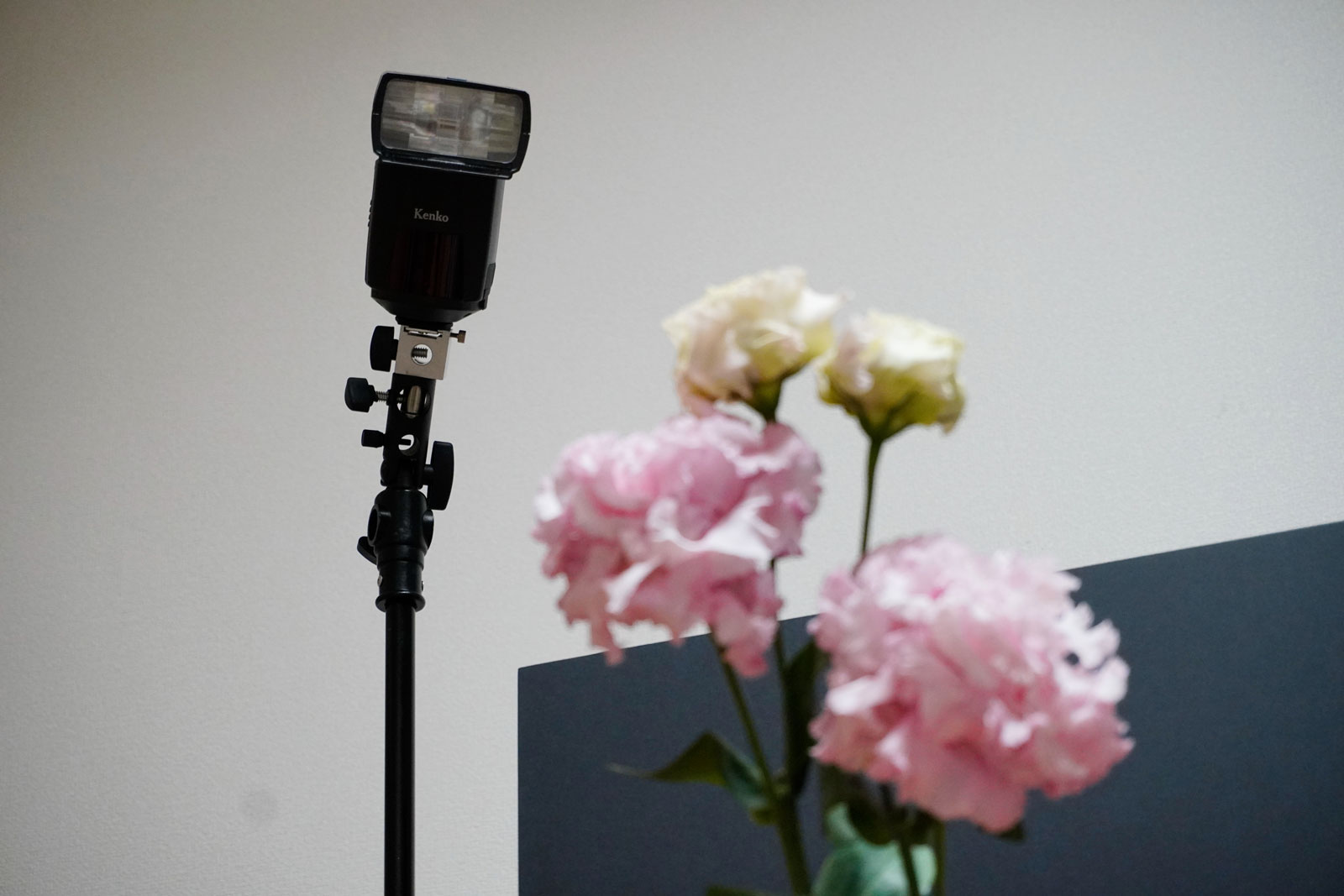 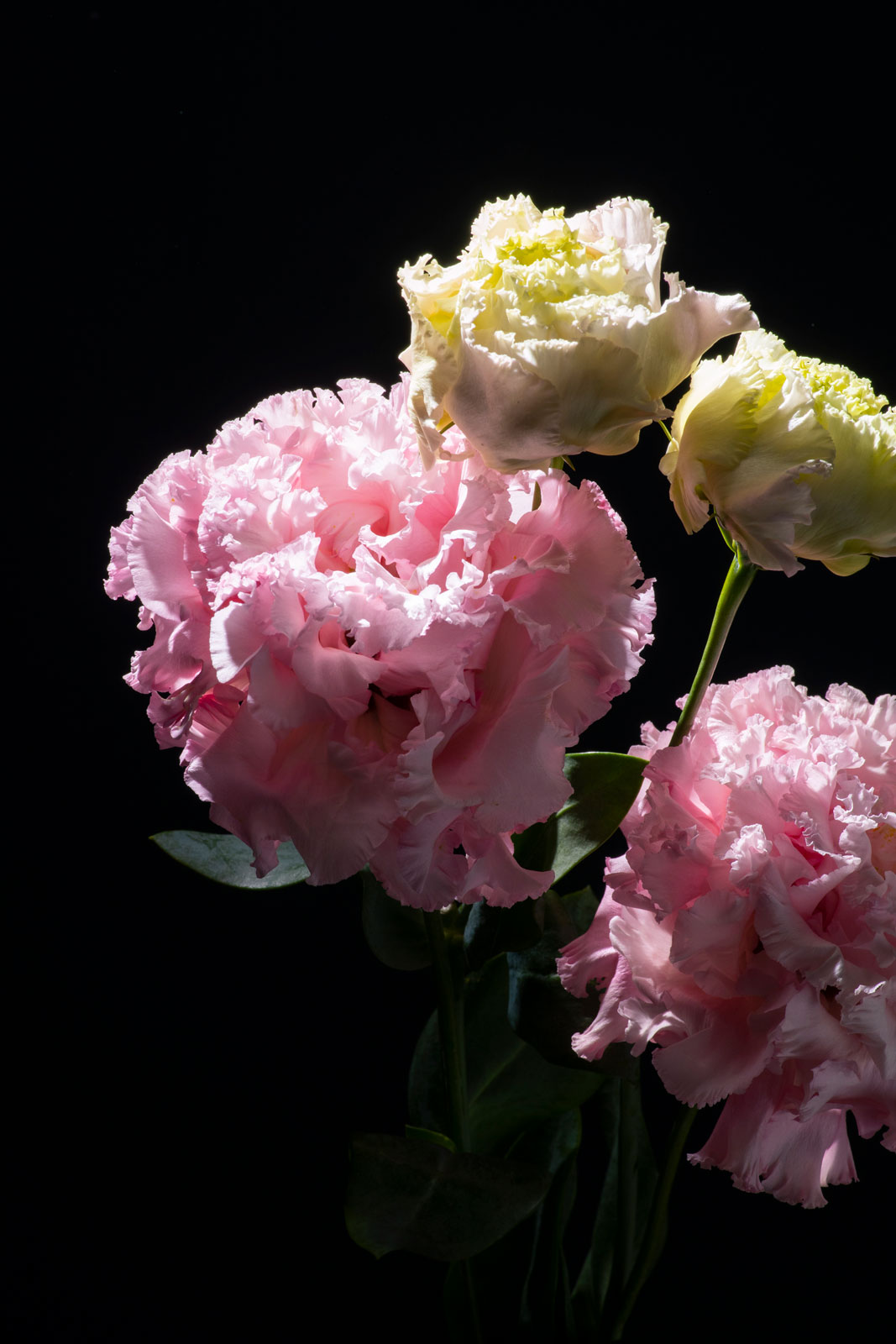 In both cuts, the beauty of the lisianthus flower petals emerge in full form and shape. Shooting is very easy. By changing the angle of light, you produce contrast. By taking in this contrast, your photo will look three-dimensional and masterful.

How did you find it?

I hope you realized how much a single flash can greatly change your photography. It is really simple so please consider giving it a go. I hope this guide was insightful and that you learned something. See you next time!